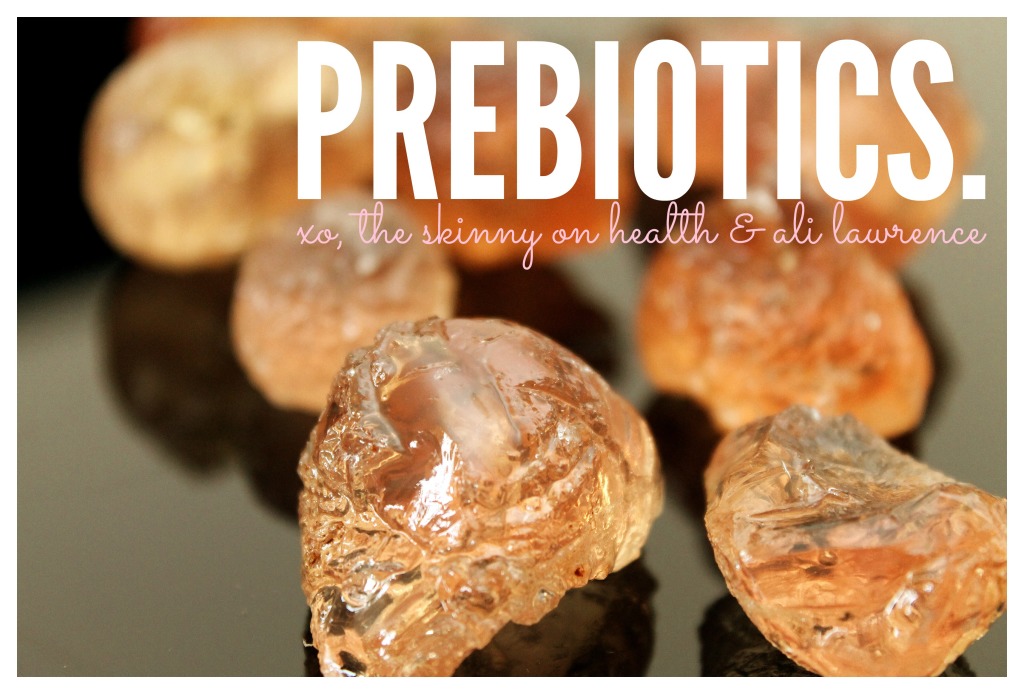 Letting Ali Lawrence take over again today to tell you guys alllllll about prebiotics (NOT probiotics!) & maintaining a healthy weight!

(My ramblings on PRObiotics here!)

To learn moer about the pre/probiotic duo, this is also a great article.

Have I mentioned that dieting sucks? Replacing necessary foods with rubbery sodium-ridden microwavable meals, consuming everything through a straw or starving myself into utter misery? No thanks. Always on the lookout for healthy, sustainable alternatives to traditional dieting, I discovered prebiotics.

You may be more familiar with the term probiotics, which are digestion-helping bacteria found most commonly in yogurt (although nowadays lots of foods contain added probiotics). Prebiotics are similar — they also serve to push digestion along, combat diarrhea and treat irritable bowel syndrome (to name a few things). Prebiotics, however, are actually nutrients for probiotics and are found in other all-natural foods.

Prebiotics are naturally occurring chemicals and could be the key to losing weight and keeping it off. See, our large intestines host about a hundred trillion microorganisms. That’s a lot of action happening in your gut. Venket Rao, PhD, emeritus professor of nutritional sciences at the University of Toronto, describes the intestines as “a war zone, where beneficial and harmful bacteria are fighting to establish predominance.” In eating more prebiotics, you aid the good side.

The already-existing community of good bacteria assists with numerous bodily functions, including (but not limited to): regulating metabolism, fighting off infection and comprising our immune systems. The bad bacteria, on the contrary, lead to issues like type II diabetes, bowel inflammation and digestive problems. Unhappy gut bacteria has even been linked to depression.

The science is rather new, but a study in mice explored the mental/behavioral differences in mice with and mice without “good” bacteria inhibitors. Their findings confirmed gut bacteria impact the brain. Specifically, the conclusion states:

The intestinal microbiota influences brain chemistry and behavior independently of the autonomic nervous system, gastrointestinal-specific neurotransmitters, or inflammation. Intestinal dysbiosis might contribute to psychiatric disorders in patients with bowel disorders.

Another study in mice demonstrated other physical effects: when mice lacked a particular protein, they were drawn to a fattier diet, gained more weight and developed diabetes. The absent protein, called toll-like receptor 5 (TLR5), is responsible for keeping bad gut bacteria in control. Without it, the mice’s bad bacteria took over, negatively impacting metabolism and overall health.

Prebiotics have also been found to boost bifidobacteria and lactic acid bacteria, two bacterial types that help digestion and mineral absorption. So not only do prebiotics help you to pass things along more regularly and potentially keep you happier, but they also aid in delivering more benefits from each food you consume.

How can you incorporate more prebiotics into your diet? Sources of prebiotics aren’t exactly normal pantry stuffers, but they are not impossible to locate. Acacia Gums (also called Gum Arabic) contain the highest concentration of prebiotics and can be purchased online. Other sources include beans, raw oats, raw dandelion greens, raw onion and unrefined wheat.

Overall, consuming more prebiotics can make you feel fuller for longer and consume fewer calories while also satisfying cravings at the same time (unlike traditional diets). They can aid the “good” gut bacteria, thus helping to combat weight gain as well as mental unease. If you’re looking to boost your mind and body — prebiotics could be your answer!