Your Pringles may be Poisonous!

I recently read an article by Dr. Lustig of UCSF and Benioff Children’s Hospital on GRAS, or “generally recognized as safe,” foods. I also recently realized that my boyfriend and I are capable of finishing an entire can of Sour Cream and Onion Pringles, a generally recognized as safe food, in one sitting. I think we can all agree, that although Pringles are delicious, there is something unsettling behind the truth of “once you pop, the fun don’t stop.” Inspired by this, I did some research and found that those deliciously addicting chips have more ingredients than the number of chips in a can. These ingredients include six recognized by the FDA as being “controversial”: coconut oil partially hydrogenated, monosodium glutamate, “natural” flavors, disodium inosinate, disodium guanylate, and sodium caseinate. 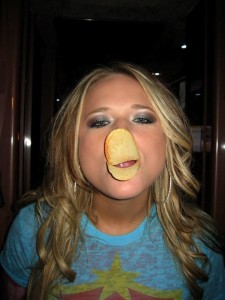 Anything and everything can kill you at the right dose. If scientists were to discover oxygen today, they would label it as a poisonous flammable gas (it just takes about 80 years, or the average human lifespan, to do so). Oxygen, water, iron, vitamin D, even pot can all kill you. Ironically, pot is probably one of the safer items on that list.  So where does our food come into this equation? Where is the line between food and poison? Process.

Processed food is overloaded with preservative and ingredients to keep it lasting long and able to be cooked easily. Because it has been overloaded, you, consequently, have been overdosed.

First, a substance becomes GRAS when it is generally recognized by experts qualified by scientific training as having been adequately shown to be safe under the conditions of its intended use through scientific experimentation. The most important part of this is “intended use.” Back when these GRAS ingredients were tested, likely in the 50s, the quantities of substances in processed food were far below what they currently are. Despite changes in our consumption and food products, GRAS has not been updated.

Second, all a food company has to do is gather a group of scientists to declare a substance as GRAS in order to petition the FDA to approve it. Even better, those scientists are paid by the food company itself! Of the 10,000 items on the GRAS list, the FDA was not even notified of 1,000 of them, and 3,000 have never even undergone review.

What can you do to make sure you’re not eating this crap? Before diving into that Lunchable, frozen pizza, even that Lean Cuisine, look at the ingredients list. If there are more than 5 that you cannot understand, put it down.