How I Detoxed from Coffee 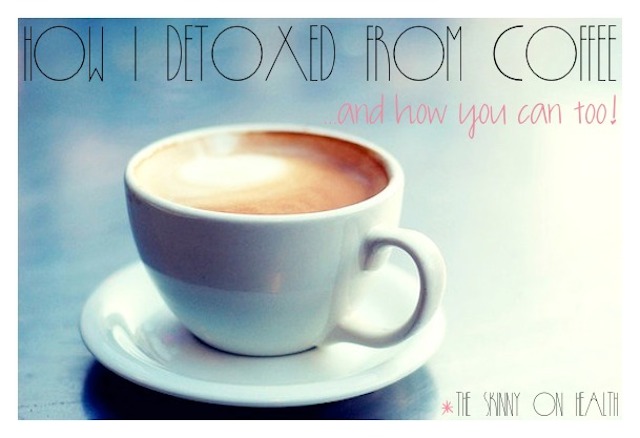 So during finals last December, I realized that I was up to 10 cups of coffee a day. TEN. I didn’t drink ten cups every day, but I definitely needed more than three to function like a human. That’s when I decided I needed a change. Coffee isn’t terrible for you in moderation, and the caffeine can be good to keep metabolism moving and weight controlled, but once you get past a cup or two a day, it can be detrimental to health.

Caffeine in the form of coffee, tea, or chocolate is not necessarily bad for you. But, as the father of pathology (Paracelsus) would say, “The right dose differentiates a poison and a remedy.” Too much of a good thing becomes a bad thing. Additionally, I hated the feeling of being ‘addicted to’ or ‘relying on’ something to keep me sane and functioning. It was a vice, and I wanted control over it. I also hated that I kept needing more and more to get the same effect. Like all drugs, caffeine creeps up. At first, a cup of coffee sends you through the roof and keeps you up at night. Before you know it, you’re downing a venti at 11 pm and passed out before midnight. Oh, and I prefer lattes, which have a ton of dairy and usually sugar. Drinking tea makes my morning caffeine almost no calories, rather than a couple hundred calories.

I didn’t want to detox from caffeine, but I wanted to first cut out coffee as my source and switch to exclusively tea. I also wanted to cut back to one cup of caffeinated tea a day (and always before 10 am), so that I would get that bouncing-off-the-walls effect from it every morning.

I waited until after finals and bit the bullet. Starting is the hardest part. Coffee is addictive, and going without it causes irritability, headaches, exhaustion, and other terrible feelings that you know can be fixed with a fresh cup of joe. You just have to power through and get through the first few days, the rest will fly by. Since December 12th, I have had only one small latte — and I didn’t even finish it. A few sips sent me through the roof with energy.

Here’s how I detoxed from coffee, and how you can too:

1. Pick your time. It’s important to pick the right time to detox from coffee. Don’t do it right before finals or a big project due. Don’t do it on a Monday when you know you need it. I chose my holiday break. Find a long weekend or a weekend where you know you don’t have a lot of responsibility.

2. Go cold turkey. You could phase out, but I just cut out all caffeine from the start. It speeds up the process. I would rather spend 3-4 days miserable than 10+ days semi-miserable.

3. It’s gonna suck at first. The first few days are the worst. I had headaches all day, was super cranky, impatient, and negative. Exercising a lot and staying hydrated really helps this. Being outside and doing fun things put me in a better mood. Don’t be afraid to take Aspirin, too! Just remember, it’ll be over so soon!

4. You start to feel better! After around 4 days (depending on how deep your love of coffee runs), your headache subsides and you are in a better mood. You’re still pretty tired, but that gets better and better every day.

5. Now, months later, I don’t even think about or want coffee. I’ve saved a TON of money on Starbucks and K-cups. I realized that I was spending around $100 on coffee a month — that’s NUTS. That’s a new pair of shoes.